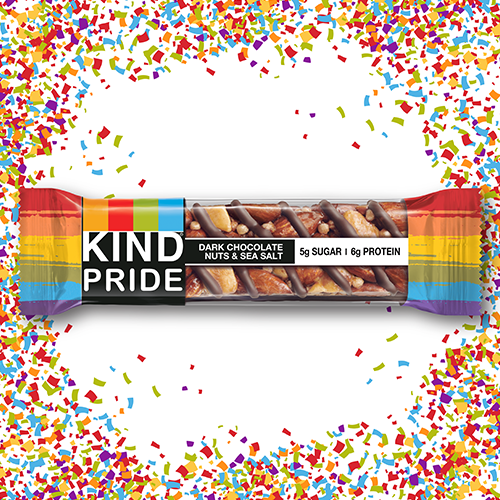 KIND snack & give back

The KIND Snack & Give Back Project is a multi-year program to inspire kindness and empathy. Through the project, KIND wears its heart on its wrapper by showcasing custom designs and elevating communities that haven’t received their fair share of kindness. With each special-edition bar, we also make a donation to a partnering non-profit organization directly supporting the community in need.

Our multi-year KIND® PRIDE bar supports our long-standing partnership with the Ali Forney Center (AFC), the nation’s largest organization dedicated to homeless LGBTQ youth. When Pride celebrations were cancelled in 2020, we illuminated the New York City skyline in the largest rainbow light display to light up Manhattan, paying tribute to those who have marched and advocated for equality. We also pledged our commitment to the LGBTQ community by signing an amicus brief in support of LGBTQ worker protections, with the trio of cases leading to a landmark Supreme Court decision for workplace protections. We are also members of the Human Rights Campaign’s Business Coalition for The Equality Act, a coalition of companies seeking to further bolster federal protections for the LGBTQ community.

To give our thanks to the American military community, we launched our KIND® HEROES bar in 2019 to benefit Hope For The Warriors, an organization that provides assistance to combat wounded service members and their families. In 2020, we expanded our support for those who keep us safe every day by advocating for the mental health of our HERO community, including healthcare and frontline workers. Proceeds of our 2020 KIND® HEROES bar were donated to the National Alliance for Mental Illness (NAMI) to support their mental health programs for healthcare workers, first responders, military service members and veterans. In partnership with NAMI, we also launched Change.org petitions directed at several state licensing boards that continue to ask invasive mental health assessments in determining a physician’s fitness to practice.

In honor of International Women’s Day, we launched KIND EQUALITY, a multi-faceted program to support the Equal Rights Amendment (ERA), a monumental constitutional amendment that would guarantee equal legal rights for all American citizens regardless of sex. To rally support, we unveiled the EQUALITY Bot, a service for Americans to text their support for the ERA’s adoption to state senators, alongside the introduction of a special-edition KIND® EQUALITY bar that celebrated gender equality. 100% of the proceeds of the KIND® EQUALITY bar were donated to the Alice Paul Institute, a non-profit organization dedicated to advancing gender equality.